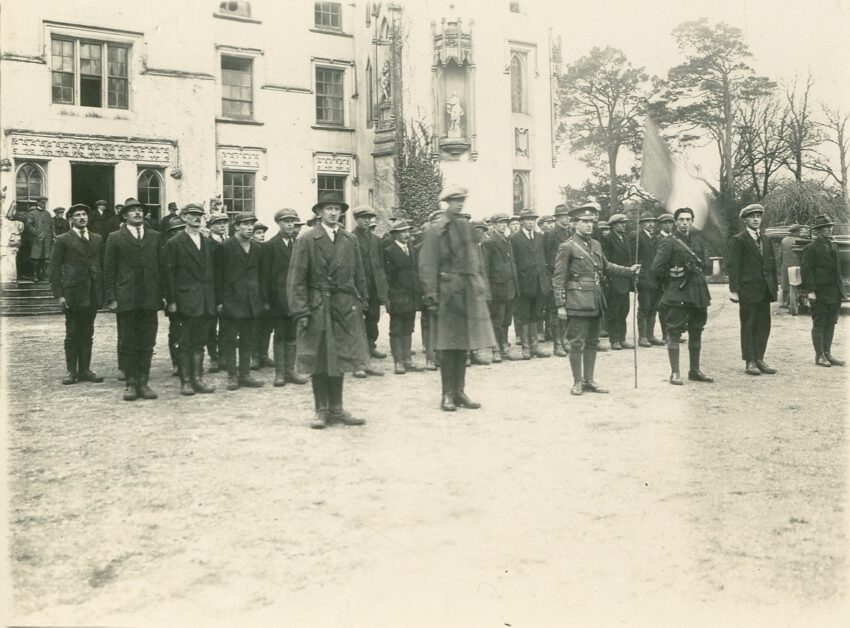 Maria Georgina Thompson Duckett had left Duckett’s Grove circa 1916 and leased the estate for grazing and tillage until she decided to sell Duckett’s Grove.

Following the War of Independence and during the period of The Truce (July 1921 – December 1922)  the Mansion and grounds of Duckett’s Grove was used as a camp for refresher training for members of the Irish Republican Army and for the use of the members of Cumann na mBan (the Women’s Army).

Standing to attention; Members of the I.R.A. on parade outside the north east door of Duckett’s Grove mansion with officers standing in front.

On 13th August, 1921, Captain Mac Curtin, (ex-American Army Officer) reported to Director of Training at General Head Quarters that he has taken over as Officer in Command (Carlow Brigade) at I.R.A. training camp located at Duckett’s Grove as ordered from 7.30. P.M. on 11th August 1921.  This report further outlines the occupation and condition of the training camp upon his arrival, including the billetts (civilian houses), supplies and personnel. This document is courtesy of Óglaigh na hÉireann Defence Forces Ireland – Military Archives – Collins Papers (1917 – 1922) and now forms part of the John Sweeney Collection.

On 19th August, 1921, Captain Mac Curtin, Officer in Command (Carlow Brigade) at I.R.A. training camp located at Duckett’s Grove reported to Director of Training at General Head Quarters of the working of camp.  This report outlines the working of camp, the Officers, the social activity of the men, and the consequences of misconduct. This document is courtesy of Óglaigh na hÉireann Defence Forces Ireland – Military Archives – Collins Papers (1917 – 1922) and now forms part of the John Sweeney Collection.

Anyone with any information on the names of the other men in these photographs are requested to email info @ duckettsgrove .ie

Captain Mac Curtin, Commanding Officer of the I.R.A. Carlow Brigade reports on the progress and discipline of Officers at I.R.A. training camp located at Duckett’s Grove

This hand written report dated 25th August, 1921 by Captain Mac Curtin, Officer in Command (Carlow Brigade) at I.R.A. training camp at Duckett’s Grove to the Director of Training at General Head Quarters Dublin, reports on the progress and discipline of the men.  This report outlines the dismissal of five Officers for drunkenness and insubordination.  The report also provides details of the cooking facilities in camp, the house and the condition of arms.  This document is courtesy of Óglaigh na hÉireann Defence Forces Ireland – Military Archives – Collins Papers (1917 – 1922) and now forms part of the John Sweeney Collection.

Cumann na mBan were officially founded on Wednesday 2nd April, 1914 with their first official meeting held in Wynn’s Hotel, Dublin chaired by Agnes O’Farrelly.  A provisional committee was established and the four objectives of the organisation were:

A further note that appears in ‘The Irish Volunteer’ report of the meeting was that women of Irish birth or descent alone would be eligible for membership.  The Members of Cumann na mBan paraded, drilled, learned first aid and raised funds to forward their aim of Irish liberty.

The photograph below taken in 1921 shows three women standing on the Union Jack, with broken glass in the background at the north east facing door of Duckett’s Grove.  These three women (L-R:- May Bourke, Eithne Coyle (Eithne Ní Chumhaill) and Nurse Linda Kearns) were imprisoned by the British authorities during the War of Independence.

May Bourke(left) helped organise a football match in Mountjoy Gaol as a distraction during her escape in October 1920 along with Eithne Coyle (centre), nurse Linda Kearns (right) and Aileen Keogh from Co. Carlow. The ladies escaped using a rope ladder to climb the prison walls and made their way to Duckett’s Grove I.R.A. training camp during the period of the Truce, where they found shelter and respite from ‘The Troubles’ until the signing of the Anglo Irish Treaty on 06th December, 1921.  Marie Comerford, an indefatigable republican claimed that she had been sent to Carlow to inform the three women that they had been ordered by Countess Markievicz to face a Court Martial for not having told her of their plans to escape from Mountjoy Gaol.

Eithne Coyle (Eithne Ní Chumhaill) (centre) from Donegal became a Member of Cumann na mBan in 1918 and was elected President of Cumann na mBan 1926 – 1941. Nurse Linda Kearns (right) was a noted republican from Sligo and helped many wounded during the 1916 Rising. She was arrested in 1920 for transporting ten service rifles, four revolvers, over four hundred rounds of service rifle ammunition, a quantity of equipment and three I.R.A. men. She was allegedly beaten and was imprisoned in Walton Prison, Liverpool, England where she went on hunger strike, she was also imprisoned in Mountjoy Gaol, Dublin. She was a witness to the shooting of Cathal Brugha when he was shot in the leg, and she held his femoral artery, preventing him from bleeding to death. She was elected to the second house of Seanad Éireann in 1938 but later returned to nursing and was the only Irish recipient of the Florence Nightingale award for nursing. She died on 05th June, 1951 aged sixty-two years.

This six page report on the week’s inspection tour of Carlow Brigade dated 11th December, 1921 from Captain Bernard O’ Neill to the Director of Training, provides details on the mobilisation of the 1st Battalion to report to Duckett’s Grove training camp on 8th December, 1921.  The report includes the inspection of the 1st Battalion on open lorries in order for the men to gain knowledge of the country and the area in which they would have to operate during the war.  The report also detail the activity of the officers, points of deployment and positions where attack would be delivered, as well as names of some of the volunteers.  This document is courtesy of Óglaigh na hÉireann Defence Forces Ireland – Military Archives – Collins Papers (1917 – 1922) and now forms part of the John Sweeney Collection.